Hello! I’ve been far more active on Instagram, Facebook and my Etsy shop and keep forgetting to add content here too. Oops! I had a few more thoughts on this sweet little book than Instagram could contain so it was the perfect time to pop on here and add them.

Dormition is right around the corner and I don’t think you can have too many books about the Theotokos for that. In perfect timing, we received this copy of Panagia Tsampika of Rhodes from the Potamitis Publishing company’s series Holy Icons of the Panagia (another Orthodox name for the Theotokos which is the feminine form of “All Holy” a title given to Mary as the supreme example of the cooperation between God and man). 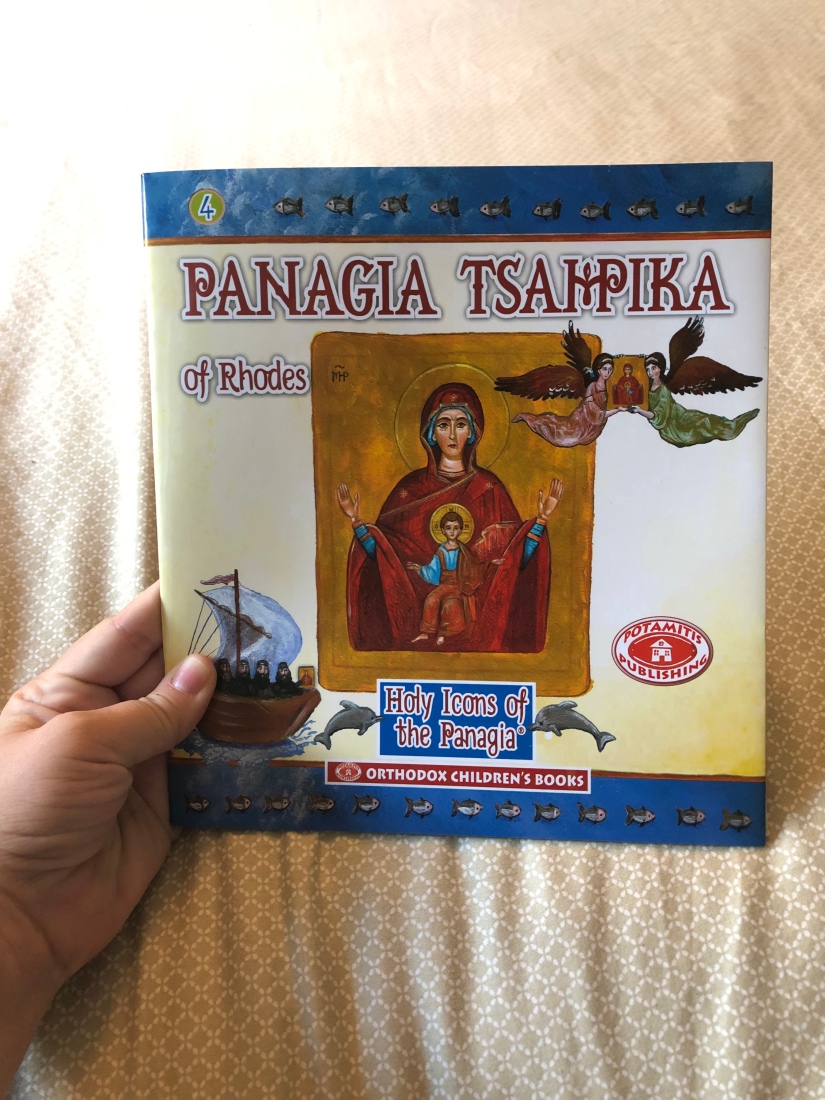 This was a really interesting story about an icon of the Theotokos that disappeared from a monastery on the island of Cyprus and was found by a shepherd and his fellow villagers hanging from a cypress tree with a lampada on a hill on the island of Rhodes. I thought the pages surrounding this initial finding were funny as the shepherd gets his fellow villagers together to go find the source of the lights flickering up on the hill. The villagers all marching along with their farmer tools made me think of the scene in the Disney movie “Beauty and the Beast” when the villagers are in a panic and going to go hunt Beast down.

I could imagine that same kind of mob mentality in this story and think it would have been hilarious to see the looks on the faces of the villagers in real life when they discovered the icon. 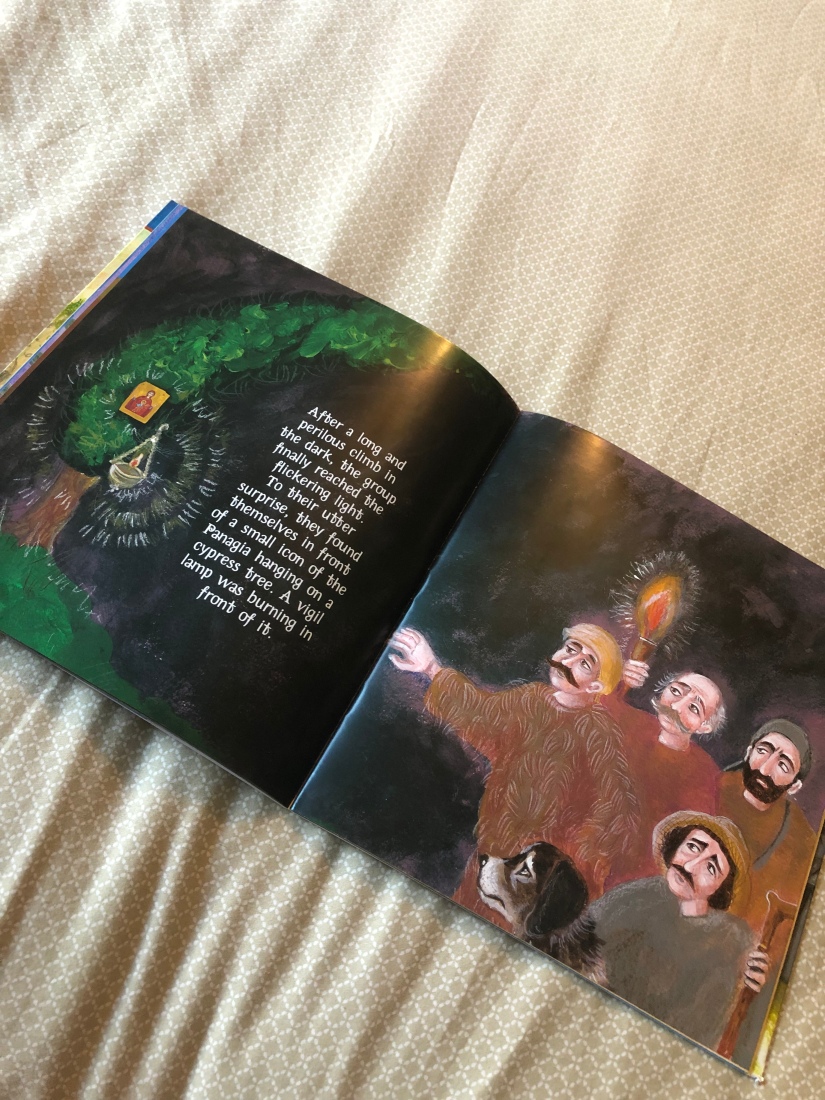 We love the Potamitis books in our family. The illustrations are especially beautiful, having a similar style to iconography, but with principles of story boarding design that advance the tale.

I asked my eldest to read the book and give some of her thoughts too since she is the bookworm in our house.

As a Protestant convert, iconography was a big hurdle for me so my natural inclination is to think that is so for everyone else too. I asked her if she thought it was weird that the icon kept going back to Rhodes every time they tried to take it back to Cyprus or if it made the story hard to believe, “No. It just made me think that icons are that much more special than I already thought they were.

She also said her favorite part was where it talked about the icon helping couples facing infertility issues, “I liked how it showed all the kids that got to be born because it makes me sad when people can’t have babies that want them.” I don’t know how much we’ve really talked to her about our own struggles with infertility and how she’s one of our rainbow babies, but, wow, and it just makes it that much more meaningful coming from her as a result. 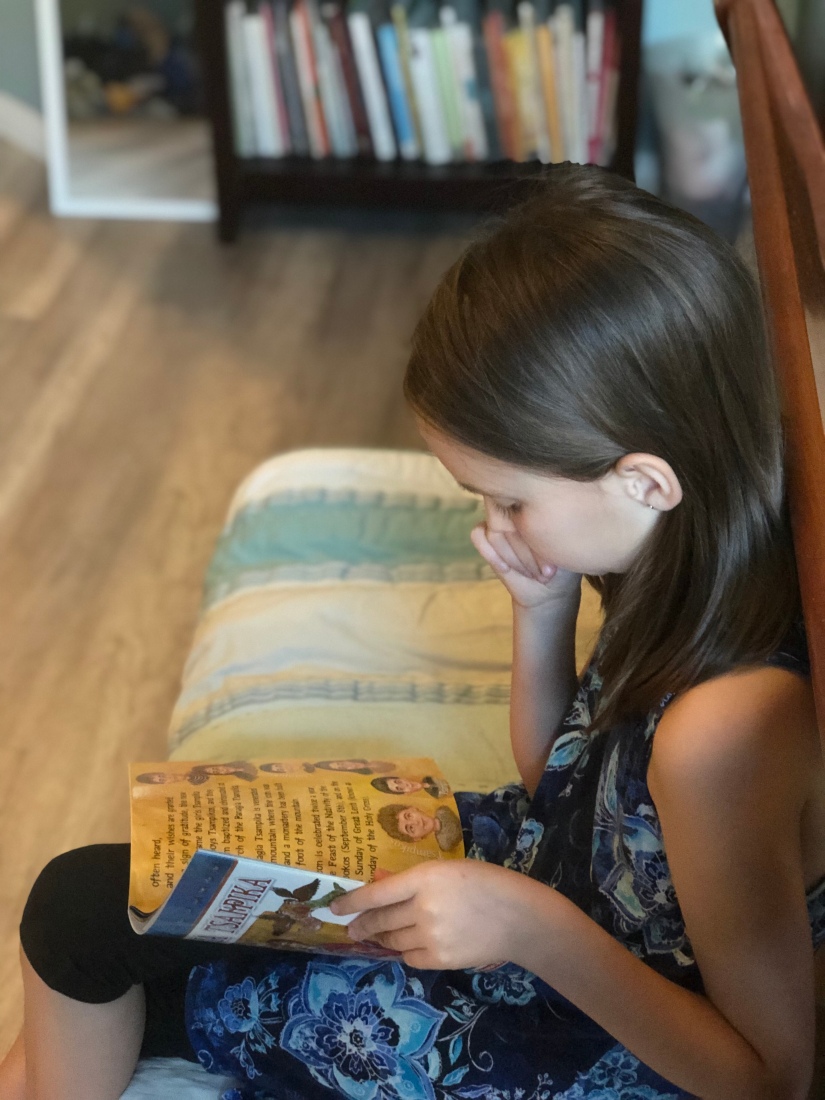 Lastly, I love that they include both the Apolytikion (like a short hymn) of the Panagia Tsampika and the Akathist to the Theotokos in the back as it is often said that the way to our Orthodox faith is through the prayers and immersion in the services.

View all posts by Lisa Wuertz